Happy Tuesday, sorcerers and space cadets! Today’s newsletter is ALL HUGOS NEWS ALL THE TIME because I am not over my all-caps excitement about the winners yet! It will take at least a week probably!

Congratulations to the 2018 Hugo Award Winners! I could not be more excited for the ones that I’ve read, and even some of the ones I haven’t! You can see the full list at that link, but the highlights are that women swept the awards, NK Jemisin won a historic third Hugo for the final book in the Broken Earth trilogy, and you can watch her incredible acceptance speech here.

Since I’ve reviewed three of the winners right here in this newsletter (*pats self on back*), I’m turning the rest of this edition over to past-me so you don’t have to go digging in your archives. Please enjoy: Jenn’s Guide to Hugo Winners of 2018! 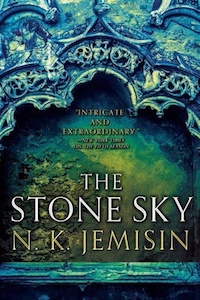 Considering that The Obelisk Gate (Broken Earth #2) won the 2017 Hugo Award for Best Novel, likely no one is surprised that I’m recommending The Stone Sky. Hot off the presses and newly released as of this past Tuesday, it’s the jaw-dropping conclusion (literally, my jaw dropped) to the Broken Earth series and it’s everything I’ve ever wanted in a third installment.

Mild spoilers for the series follow, so if you want zero plot discussion just go ahead and get yourself all three books and start reading!

The Obelisk Gate left Nassun and Essun finally aware of each other’s location and powers, but many miles apart. The stone eater factions have revealed their goals, and now the fate of the world is hanging in the balance. While The Stone Sky takes us forward to the moment of truth, it also takes us back in time and reveals more history of the Guardians, the obelisks, and the sundering of the Moon. If you’ve been wanting a deeper look at the history of this world, you will be delighted; Jemisin balances the plotline that began in The Fifth Season with a new past narrative that is just as compelling as any other thread we’ve had throughout the series — and there have been many. The conclusion had me white-knuckling my way through the final chapters, and devestated that the story has come to an end.

I’ll be rereading the whole series before long; for those of you who may have read The Obelisk Gate a while back I do recommend a reread. Jemisin does a solid job of providing context where she can without bogging down the narrative, but there were moments where I had to pause to try to remember certain previous characters and plot points. After all, it’s not as though a reread is a hardship. Jemisin’s best, most complex series to date, Broken Earth has reached the top five in my personal list of favorite series, and it will take a hell of a lot to dethrone it. 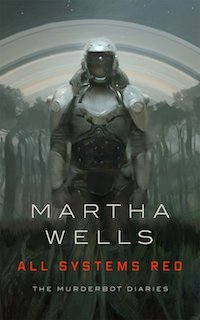 It only took a bajillion awards and the repeated insistence of various Book Riot Insiders for me to finally read All Systems Red, and I am happy to finally be on this bandwagon.

Despite the ominous name of the series, it’s surprisingly light on gore. All Systems Red follows the self-described Murderbot (technically a cyborg programmed to be a security guard) as it works to protect an exploratory team of humans on an uninhabited planet. This becomes very complicated when their comms go down, and dangers start to come from the least expected places. There are gun-battles, giant worms, and plots aplenty, but it’s ultimately more optimistic and fun than anything else — ideal summer reading.

It is a novella, so telling you much more about the story would be very spoilery. Instead, I will tell you that Wells envisions her AI character with wit and panache. Imagine if Spock and a computer had a painfully shy baby that just wanted to watch K-dramas all the time — that is Murderbot, more or less. Add to that the dynamics of the crew as they interact (or don’t) with their security bot and struggle to understand its personhood, and you’ve got a heartfelt, captivating story with great action and pacing. And there are sequels! Artificial Condition and Rogue Protocol are out now, and Exit Strategy will be out in October.

Read this very important tweet from her acceptance speech.

Set in a near future in which virtual reality is commonplace, the story follows — well, you, since it’s told in second person. Your name is Jesse Turnblatt, and you’re a Vision Quest guide, making your living fulfilling the dreams of tourists (white ones in particular) by guiding them through an Authentic Indian Experience. When a customer shows up one day who wonʼt follow the script, you find that more than just your job is on the line.

Roanhorse packs a mean punch in a small package, tackling appropriation, identity, and the long-reaching consequences of colonialism with gallows humor and scalpel-sharp prose. Note: her debut novel, Trail of Lightning, was one of the books I finished this past weekend and a full (gushing) review is VERY SOON FORTHCOMING.